Optimized for coral growth and color, well-blended, and pleasing to the eye.

Coral growth and success without a complicated interface

“The color is great, the interface is great, the coverage is great. But, most of all, I now have a great light that is native to the APEX ecosystem. Finally!”  – Richard Ross

The SKY is a 200w, LED aquarium light, with patented diffuser technology, that smoothly blends all of its 104 LEDs to create a homogeneous field of coral-health-optimized light — no hotspots, no disco-ball effect, no need to augment it with other lights or add-on diffusers — but best of all, none of the harsh shadowing and fractured spectrum found in most other popular lights.

The earth is illuminated by the sun, but not as a single point of light like a light bulb. If it were, there would be harsh shadows and the reefs as we know them would likely not exist. Instead, our planet is really illuminated by our atmosphere, the sky, as a filter and diffuser of the sun’s rays. This results in a homogeneous, bathing of light from all directions. The SKY brings to your aquarium that blanket of natural and life-sustaining light that nourishes earth’s coral reefs.

While a few prefer the natural look the sun and sky provide on natural reefs, most tend to appreciate a more blue-purple light in various degrees. But the desired aesthetic is not universal. So the SKY delivers both. It can be easily tuned to the unique “look” that individual reef-keepers desire, without sacrificing the quality of the life-giving light the corals and other animals need.

WIRED OR WIRELESS - YOU CHOOSE!

OPTIMIZED SPECTRUM FOR GROWTH AND COLOR

UV LED GIVE THAT EXTRA POP

DIFFUSED LIGHT, AND SHIMMER TOO! 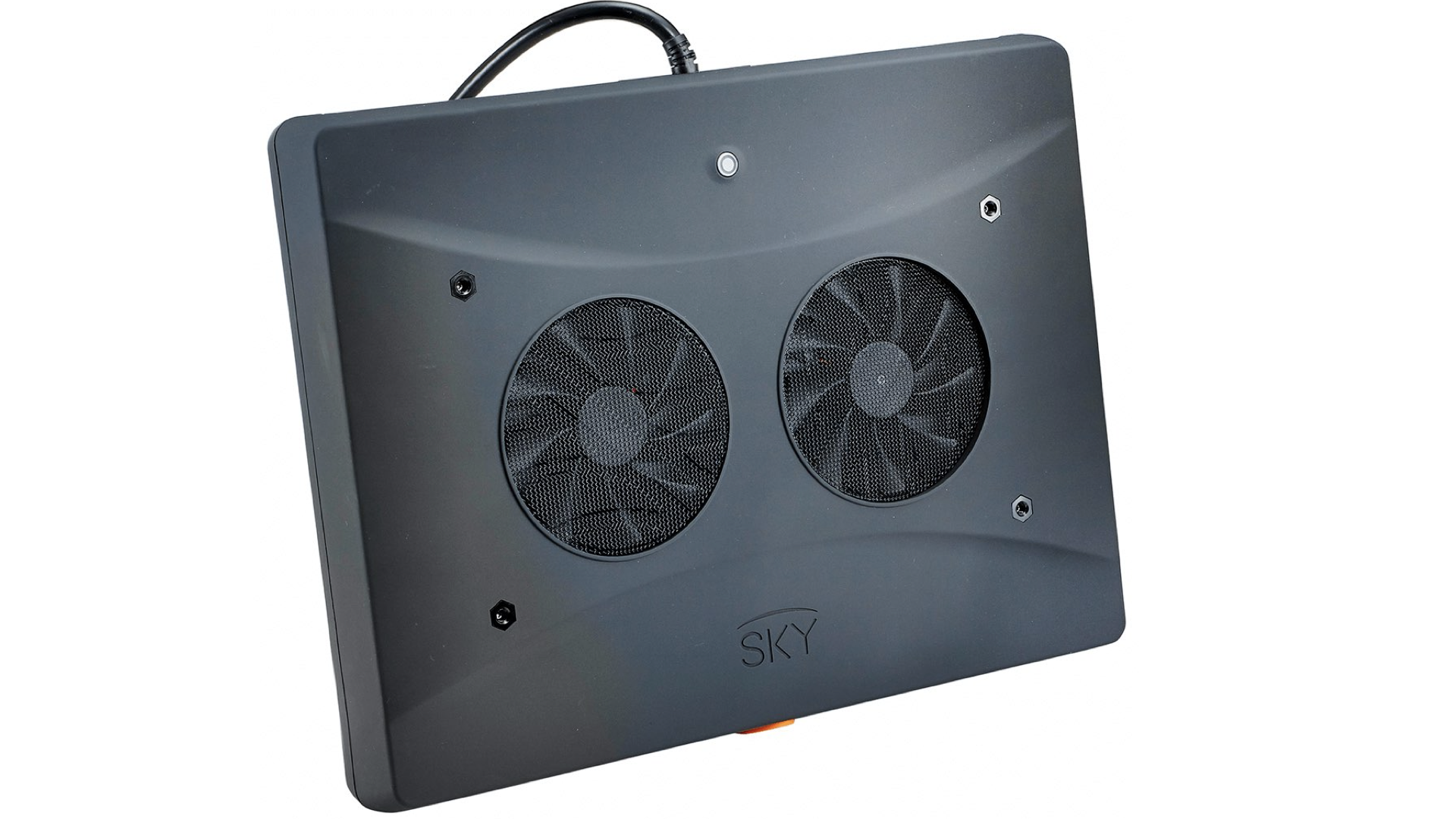 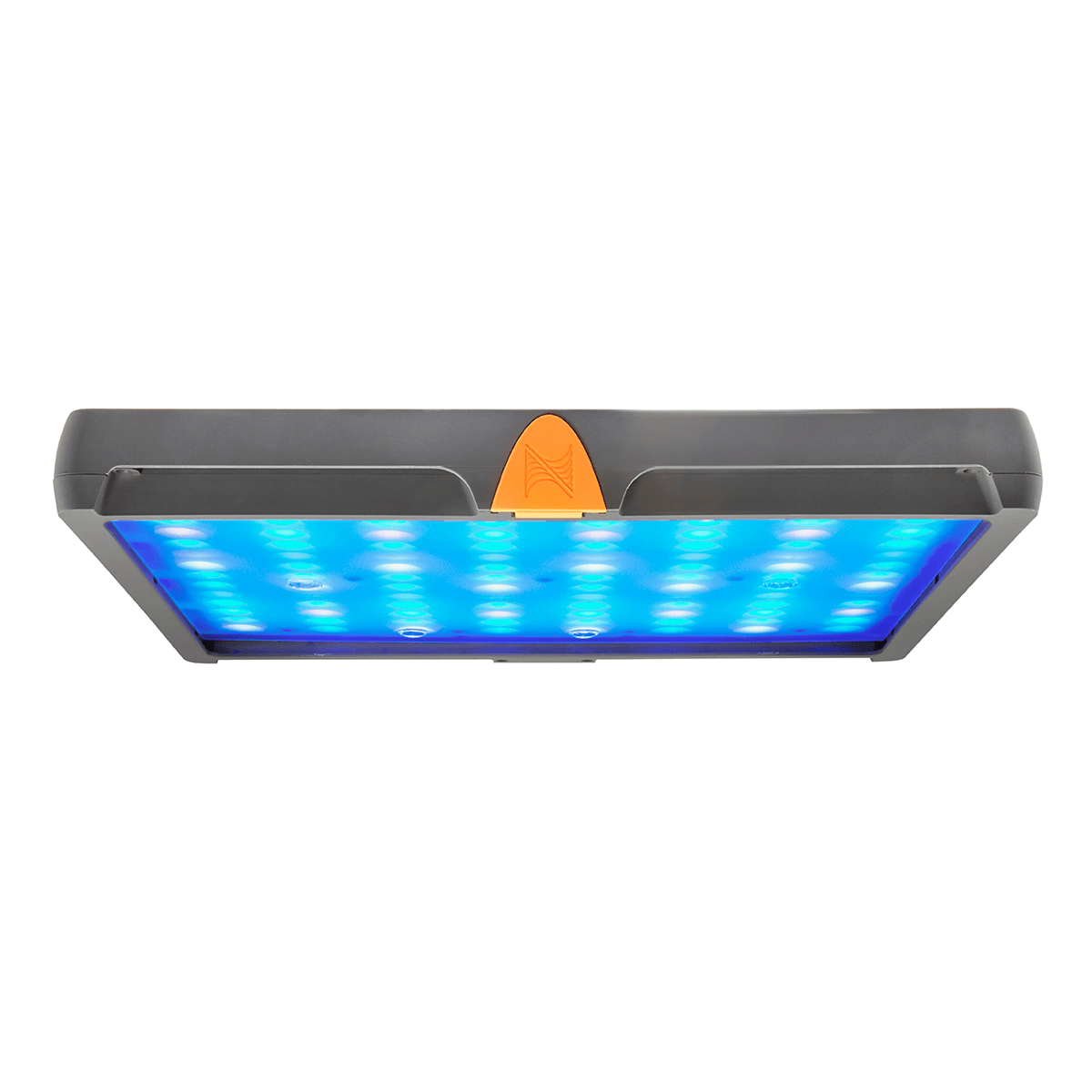 In nature corals are minimally shadowed because they get softened light from horizon to horizon due to the diffusion aspect of the atmosphere. For proper coral growth and health, this is something we attempt to accomplish in our reef aquariums.

Unfortunately most LED reef lights have a small surface area of light origination that creates dark areas and harsh shadows – sometimes with an altered spectrum. As a reef aquarium matures, this is the main limiting factor for coral growth and health. Many attempt to correct this deficiency by adding additional fixtures, light-limiting diffusers, additional fixtures or hodge-podge together a hybrid solution with supplemental lighting strips.

The SKY has a large surface area of diffused light at the origin which emulates the horizon to horizon effect of the atmosphere and minimizes shadowing. The SKY  alone is all you need to properly light your reef aquarium and provide for the health, growth, and color needs of even the most demanding corals. 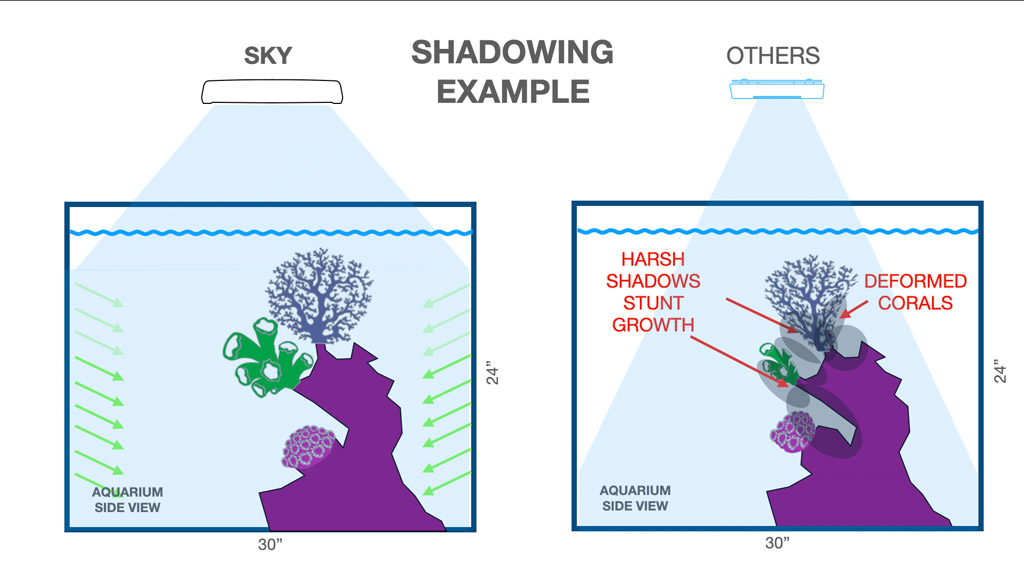 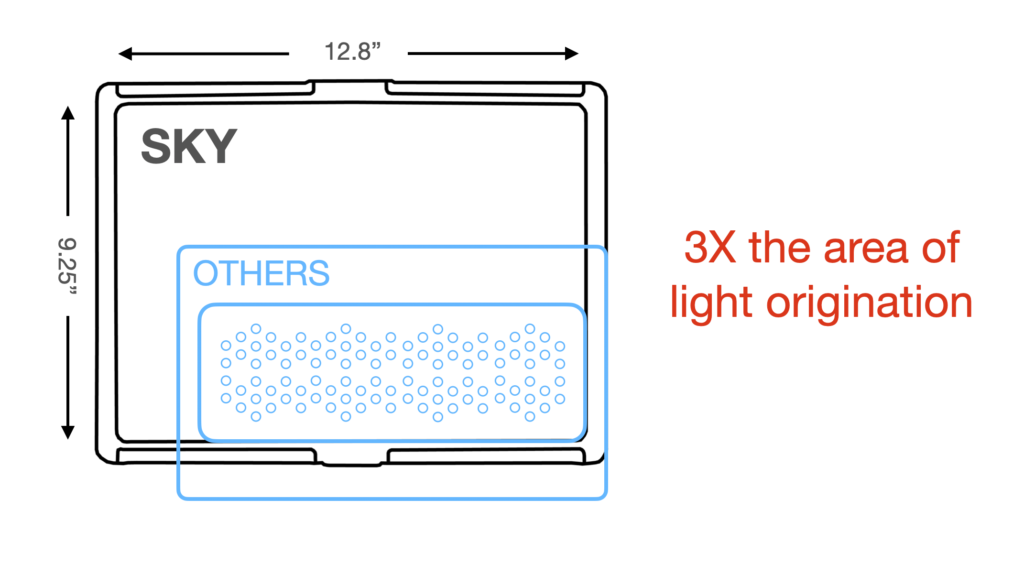 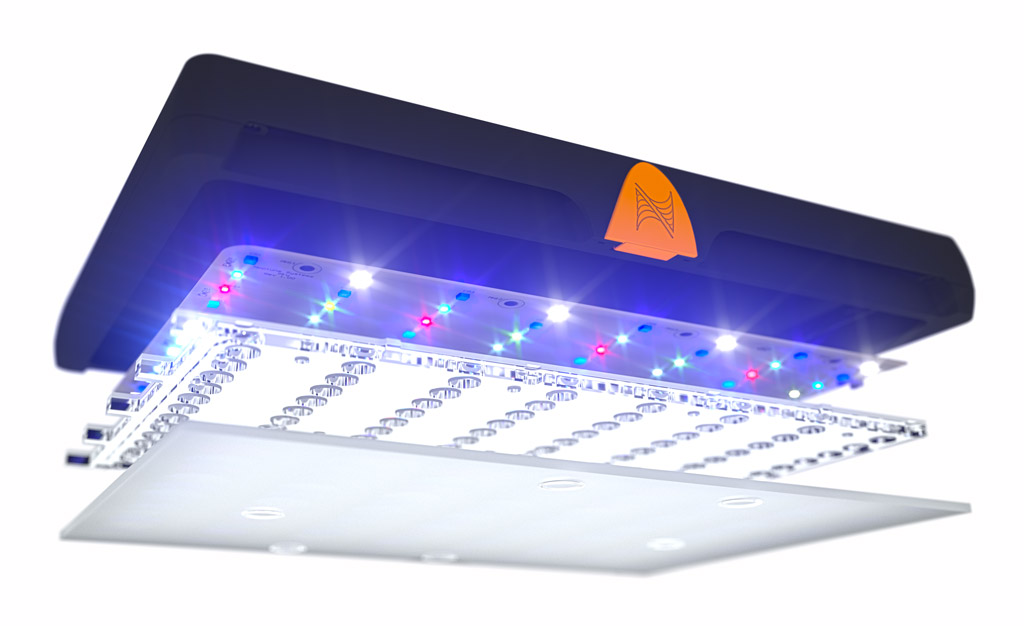 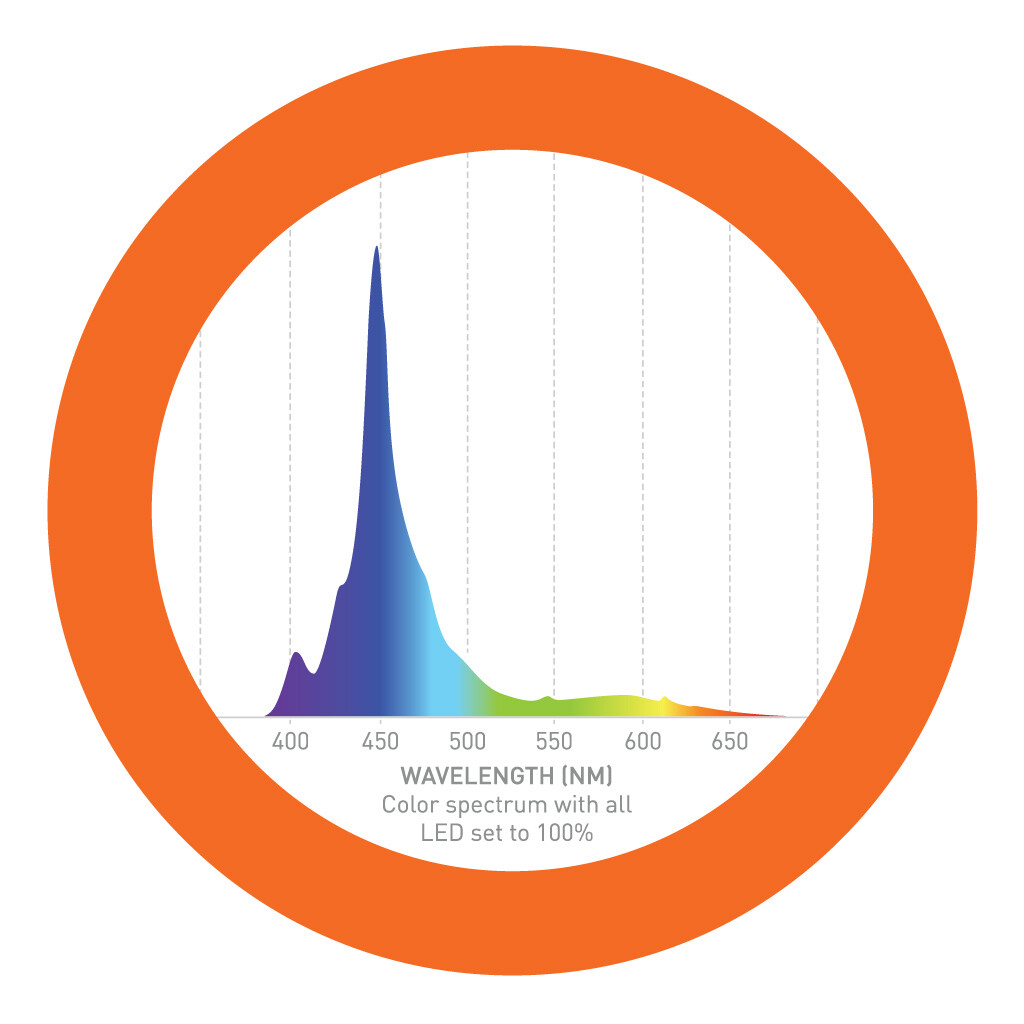 Do LED lights grow healthy, colorful corals? Of course. But to be optimal, they must have the right spectral balance of colors, sometimes referred to as “full-spectrum”. Also, and more importantly, that light must be blended and spread uniformly over the entire aquarium.

All full-spectrum, LED reef aquarium lights mix various discrete LED colors, each one with its own segment of the spectrum, along with whites. Blending all these LED together into homogenous light is where things get tricky. Some light designs bring all the LED very close together so that they blend at the source. The downside here is this very small area of light origination creates the harshest of shadows. Others spread out LED, hoping to mix the various spectrums of the discrete LED on their way to the aquarium – but this leads to the “disco-ball ” or “static” effect we often see in the shadows or on the sand in the aquariums.

The SKY has 104 carefully curated LED, split into four controllable channels, spread across a large surface to maximize the area of light origination and minimize shadowing. Then the SKY uses patented light engine technology that mixes some of the light from all the LED right inside the light panel. Then that light, along with some of the direct light from the LED, all pass through a carefully selected diffuser panel that evens out all the light while minimally reducing the light output. The result is a well-blended light output, that has the same spectrum, nearly everywhere in the aquarium, with minimal shadowing and no disco-ball-effect.

SUCCESS, WITHOUT THE HASSLE

Up until now setting up an LED reef light for success usually meant trial and error moving color sliders around, asking friends, reading forum posts, and in the end you were basically on your own.

With the SKY, we have simplified the entire process from connection, to initial configuration, to ongoing operation. Simply connect the SKY to your Apex, or run it wirelessly connected to your mobile device – no Apex necessary.

Then, configure the SKY. Apex Fusion will ask you a series of questions and show you different “looks” for you to choose from – each one curated to provide light spectrum for the growth and health of your corals. From there, simply choose when you want the lights to come on, go off, and that’s it!

Don’t think the SKY is just for noobs. There is also access to advanced scheduling features, LED intensity sliders, and an infinite amount of ways to integrate the operation of your SKY with other Apex functions. #ControlFreaks rejoice!

“No-one would believe I’d ever give up my metal halides, but it’s true, I’ve made the leap and am happy to report the future is looking brighter.” – Marc Levenson (melevsreef.com)

APEX-CONNECTED, OF COURSE – BUT NOT REQUIRED!

The SKY easily joins your Apex ecosystem simply by connecting its integrated AquaBus cable to an available port on one of your modules or the base unit. This makes set up fast and easy. If you have more than one SKY, the included Y-cable can be used to chain them together and still only need one AquaBus connection on your Apex.

Alternatively, those without an Apex can wirelessly connect to the SKY and operate it wirelessly over BT on their mobile devices. 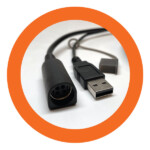 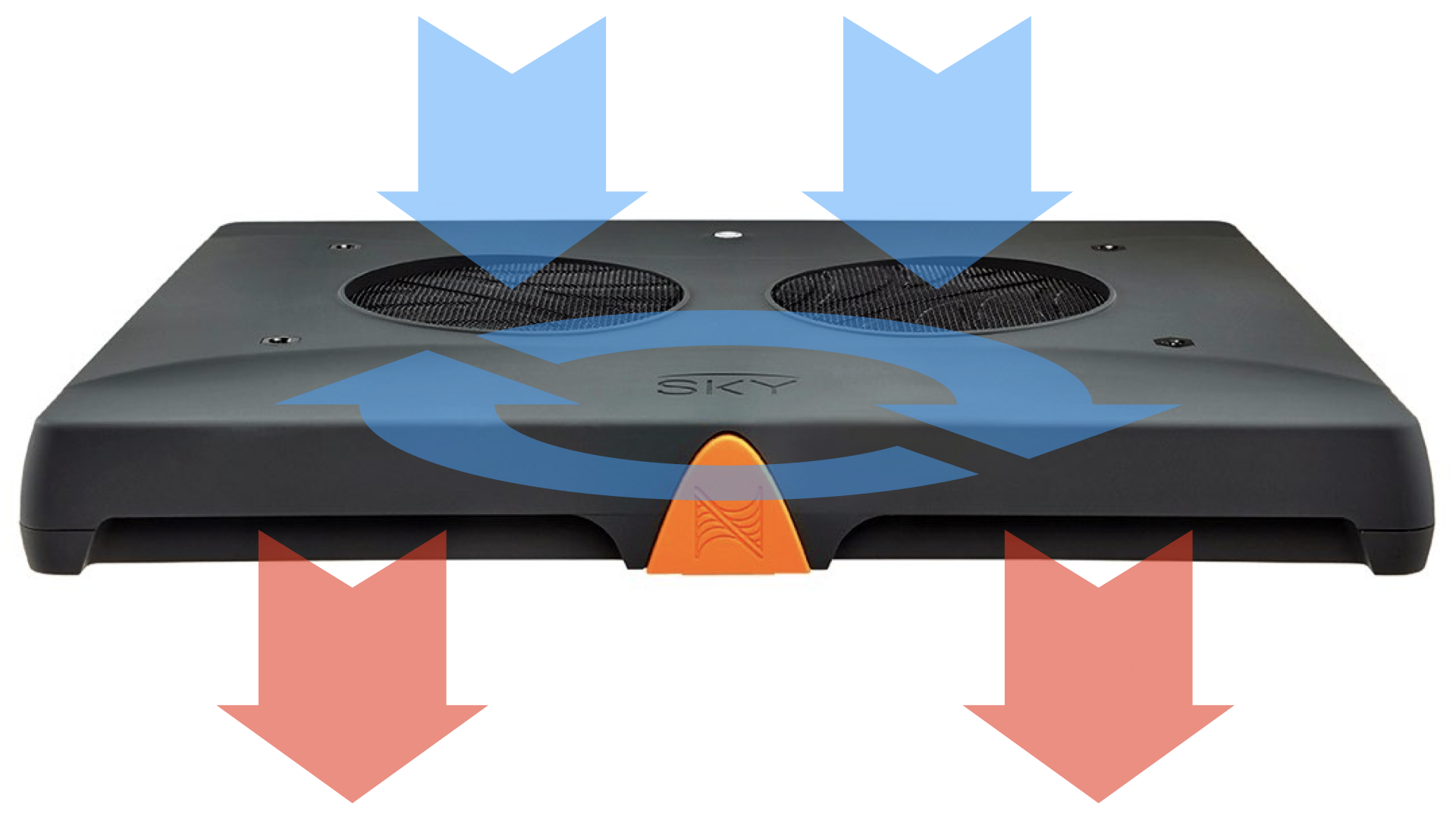 The SKY has an advanced approach to thermal management that is more than just the two fans you see.

So, why two fans? With two fans the SKY can operate them at much lower RPM while keeping the LED cooler. Cooler LEDs mean a longer lifespan for your light. Also, running the fans slower means that the SKY is quieter, in fact, its the quietest actively-cooled LED in its power-class. The SKY puts out just 33dB at one meter and set to 100%. The leading competitor clocks in at >40dB at 100% power.

Along with these fans a temperature and power monitoring algorithm manages their speed. If one fan were to fail, the other will pick up the slack and still keep the SKY running and safely cooled until a replacement is obtained. Also, if for some other reason the SKY cannot adequately cool itself, such as excessively high ambient air temperature, it will throttle the power to the LED to keep them safely cool.

Many lights on the market force you into purchasing their mounting solution. We decided to broaden your options by adopting a standard already widely used by one of the most popular brands on the market. So, in addition to our optional, sleek black cable hanging kit, you now have many other ways to mount your SKY over your aquarium. This also makes the SKY an even more cost effective option when considering a lighting upgrade. On top of this, we are working closely with 3rd parties to build even more mounting options for our SKY customers. 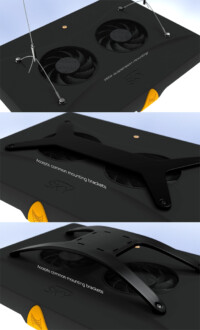 SHIMMER IS A PERSONAL  CHOICE 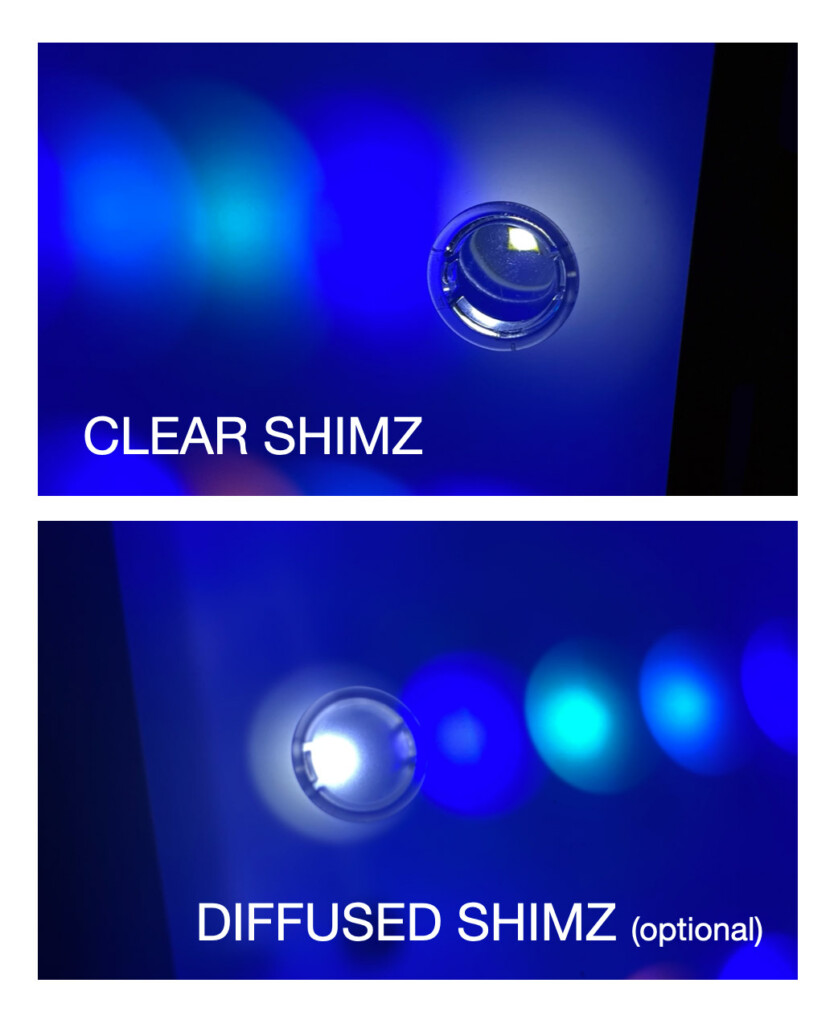 As equipped, and with surface water agitation, the SKY provides a gentle shimmer that suits the tastes of most aquarists. We realized early in the SKY development that when you put a diffuser in front of LED, as many lights do, it tends to kill off nearly ALL shimmer. And that’s not good. So we designed a hybrid diffuser that has clear covers, called Shimz, over four openings in the diffuser where the white LED can shine through with no diffusion. These white LED then bring back the shimmer lost by the diffuser – but in just the right amount. But because not everyone has the same taste, we created an option. If you wish to have even less shimmer, diffused Shimz can be swapped in – available as an optional purchase.

We call it the SKY for one more reason. The moonlit sky is very important to coral reef health and its natural processes. For aquarists, moonlight simulation can play an important role for the animals, and it provides visual interest in the aquarium as well.

The SKY provides moonlight via four dedicated moonlight LED in two colors. These LED will change intensity following the earth’s current moon cycle. Alternatively, you can set them to night-light mode and they will simply come on opposite your daylight settings.

Dedicated LED are used since dimming the main LED is still just too bright to be an effective moon simulation. Doing it this way allows for a proper range of up and down intensity for emulating the brightness of the varying phases of the moon. The two colors on each moonlight give you some options for how you want the moon to shine. Each pair of LED has its own Shimz fitted in front of it so you get that beautiful night time moon-shimmer all across your reef. 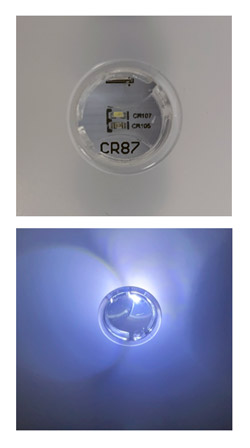 We spared no expense when it comes to the power supply included with the SKY. This industry-trusted, 219W Meanwell power supply is UL rated and has a locking connector for a secure interface to your SKY. 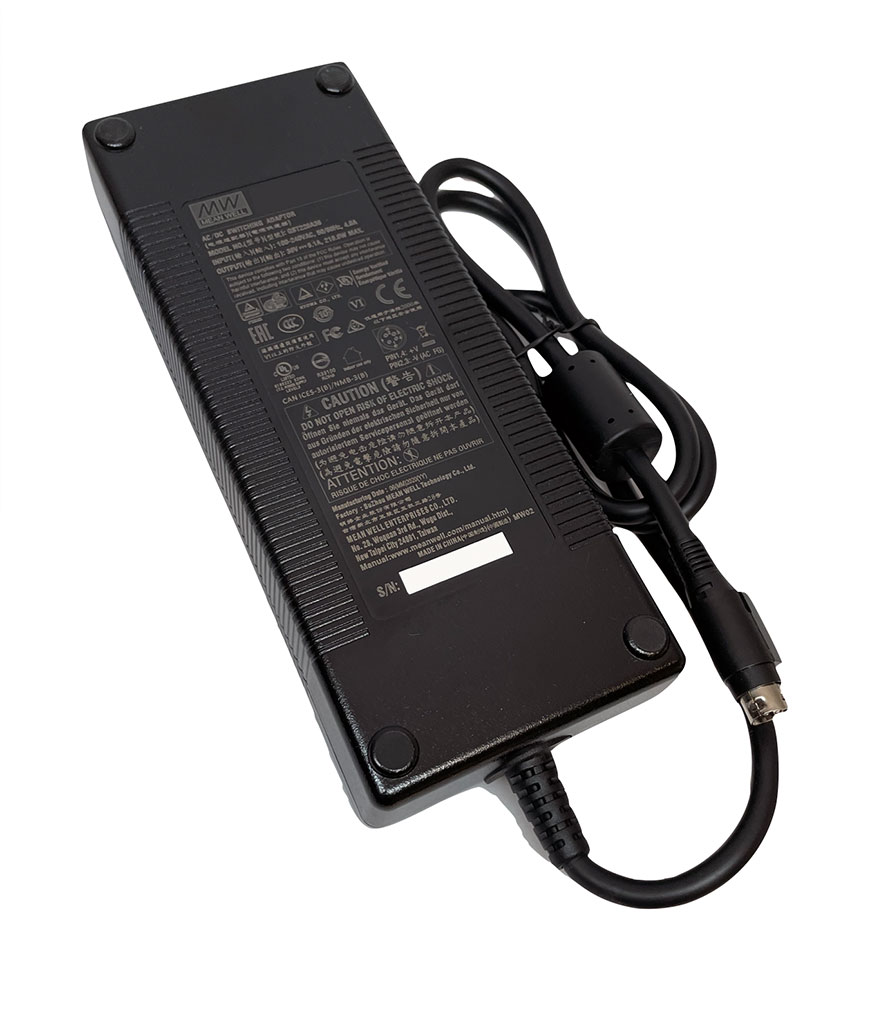 THE ONLY LIGHT YOU NEED TO BUY FOR YOUR REEF!

The SKY is not inexpensive. For sure. But please take a moment to hear us out on this one.

As reefers ourselves, we have for nearly a decade been bothered seeing revision after revision of lights, year after year, as companies effectively use their customers as test subjects to evolve their reef lighting designs.  Even after all this evolution, they still underperform so much that customers are forced to buy more lights than they should, or they Frankenstein together hybrid solutions to make up for the inability of these lights to adequately cover a reef aquarium.

It is for this reason we have spent a number of years and a great deal of development perfecting the SKY – a lighting solution that we believe will be the only one you will need over your tank, with fewer fixtures, and no supplementation whatsoever. When you purchase the SKY as your reef aquarium lights, that’s it, nothing else to buy, no upgrades necessary in two years, no other stuff to hang over your tank. Period.

So we hope that you factor all of this into your judgement of cost and come to the conclusion that the SKY is an excellent value comparatively. 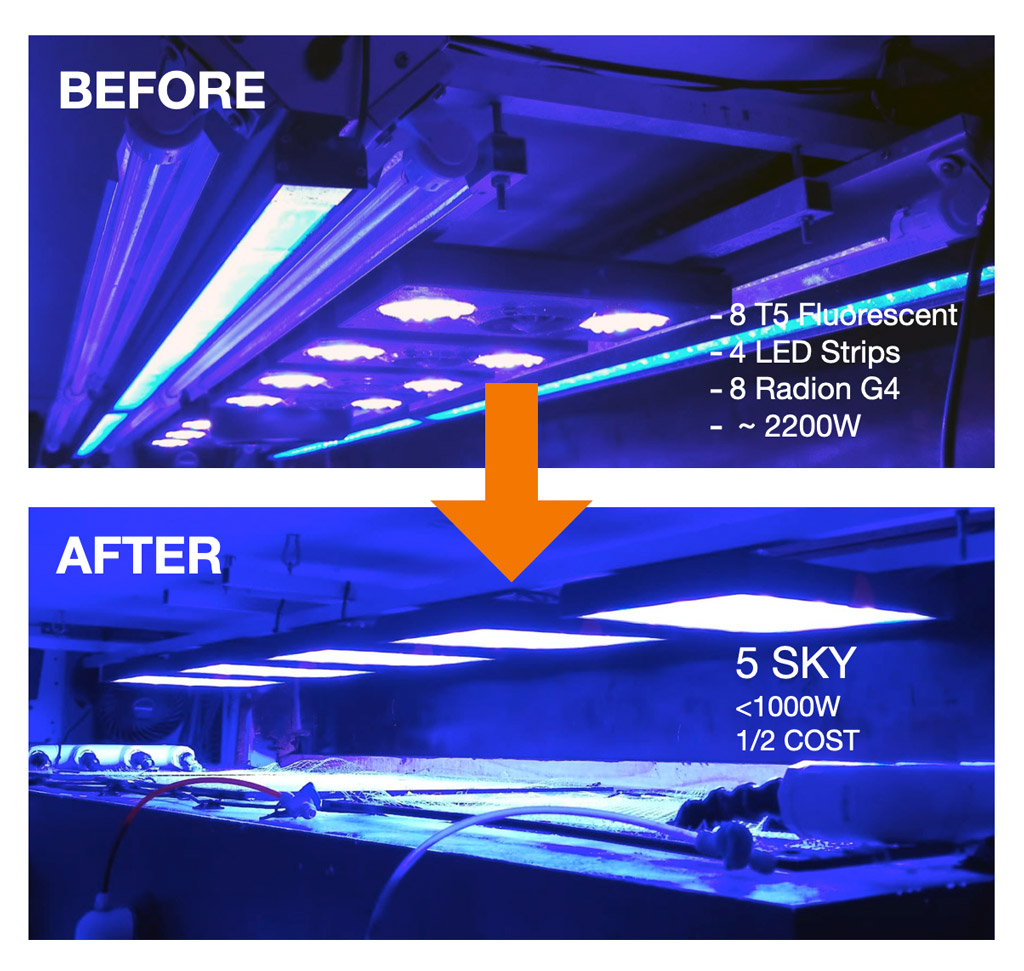 “When I switched to the SKY I was able to drop the use of any supplemental T5 for lighting my tank. The quality of light coming from the sky has a great look, even coverage, and my corals have responded nicely by ratcheting up their growth.” – Mark Callahan,   MrSaltwaterTank.com

JavaScript seem to be disabled in your browser.

You must have JavaScript enabled in your browser to utilize the functionality of this website.